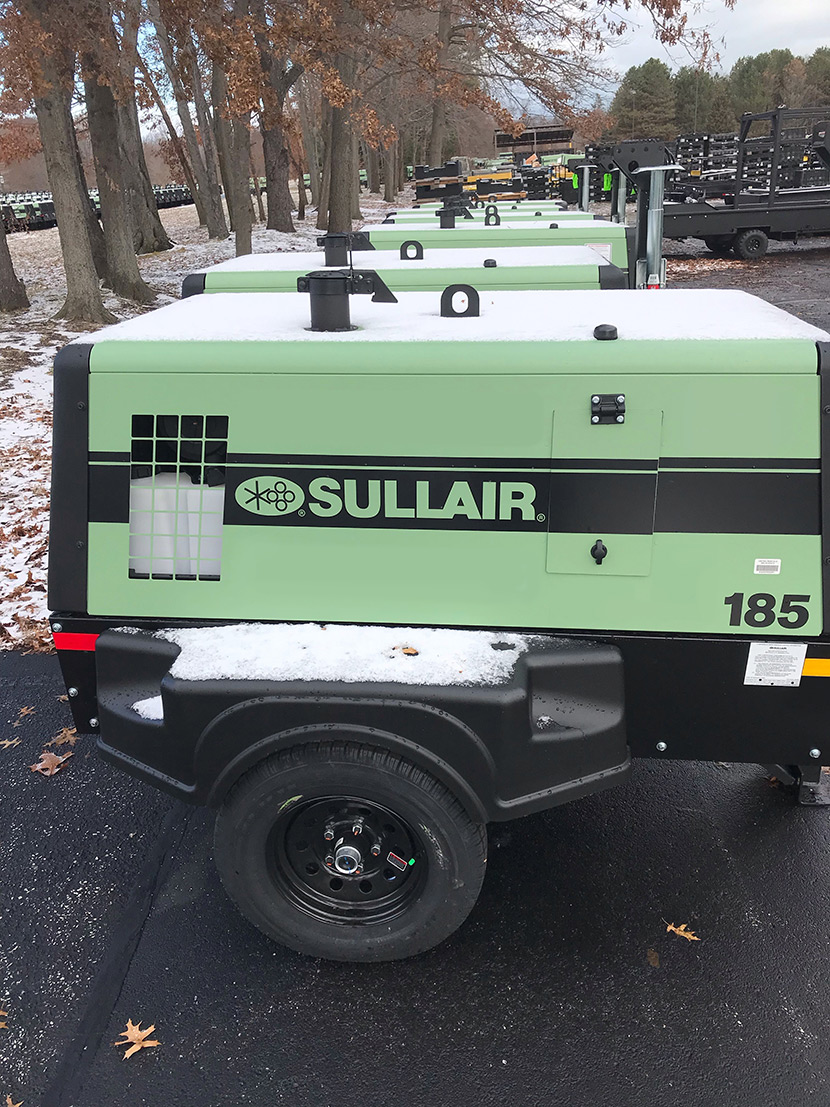 The days are getting colder and shorter, and soon we’ll feel the pains of winter. Winter and cold weather is harsh on all of us—including your equipment. Winter is almost always harder on your equipment than during the warmer months, which means you need to properly winterize your equipment to help avoid unexpected downtime.

The best time to winterize is in the fall before the temperature gets too cold. Complete the required preventive maintenance per the manufacturer’s recommendations. Maintaining appropriately rated fluid and keeping the battery charged will go a long way in avoiding winter worries.

Starting the machine exerts the most effort, with some experts saying more damage is done in the first 10 seconds after cold-starting a diesel engine than at any other point in the operating cycle. Both diesel engines and compressors use fluid, which gets higher viscosity – or thicker – when the machine is not in use. As the fluid gets thicker, the rotating parts in the engine and compressor must work harder to rotate. In some cases, without the correct fluid, the engine may not even turn.

As the machine is turned on and warms up, the fluids then become thinner and the machine will operate more smoothly. It is important to use a fluid with the proper viscosity. We recommend users of Sullair machines use Sullair AWF All Weather Fluid, which is designed for extreme weather conditions. This multi-viscosity, highly refined, petroleum-based fluid combines easy cold weather starting and warmup with exceptional lubrication in both hot and severely cold conditions.

Similarly, compressor users must also change the engine oil to winter grade/low viscosity engine oil as recommended by the engine manufacturer. In addition, users need to use a winter blend of diesel fuel for proper operation of equipment.

Use an Engine Block Heater

A block heater warms the engine block and subsequently the engine oil to increase the chances the engine will start and warms up the compressor faster than it typically would in extreme cold conditions.

Block heaters are standard on some portable air compressors, such as the Sullair 185 and 1600 families, and are optional on the 375 family.

When portable air compressors are stored, and even at times while in operation, the control air lines and controls may collect moisture and freeze, making them in-operable. Ensure the air lines remain protected from the elements (draft of cold air that will freeze the condensate collected) so they remain condensate-free, or store the compressor in above-freezing temperatures when not in use so if there is condensate, it won’t freeze.

Sullair portable diesel air compressors offer two options for cold weather packages. One allows you to start and operate the machine to as cold as 10° F (-12° C). The second option allows operation at temperatures as low as -20° F (-29° C).

One of the major changes with the switch to Tier 4 Final emission-compliant, diesel-driven engines was the switch from mechanical to electronic controls. This includes diagnostics and controls and after-treatment systems. While most end users are now aware of the maintenance and care associated with operating Tier 4 Final machines, there are often new users who are unaware or do not follow proper procedures, making these tips important.

After-treatment systems in Tier 4 Final diesel equipment are categorized into three technologies users and technicians need to be aware of: diesel oxidation catalyst (DOC), diesel particulate filter (DPF) and selective catalytic reduction (SCR). Most of the smaller portable air compressors use one or two of the three.

A DPF can be independent or included in the same canister as the DOC and is designed to remove diesel particulate matter or soot from the exhaust gas of a diesel engine. The soot burns in the DPF and turns into ash, which eventually requires cleaning of the DPF exchanged. The U.S. Environmental Protection Agency (EPA) requires engine manufacturers to design DPFs on 175 and higher horsepower engines to last at least 4,500 hours between cleanings, and on 175 horsepower and below engines, 3,000 hours between cleaning intervals.

If running DPF on idle, the after-treatment system does not get enough time at the temperature to burn off all of the soot and regenerate, so it can experience some clogging and errors on the engine.

Compressors run at high engine loads, so the after-treatment system is designed to burn off all the soot and clean on its own. However, in cold environments, running on idle for long periods of time means it still may not run hot – which can turn into potential issues of which end users should be aware.

On 375 cfm and up units, which use Diesel Exhaust Fluid (DEF), be careful as the DEF fluid tank can sometimes freeze. The compressor engine has time limits for allowing DEF to thaw before errors appear. Different engine manufacturers have different time limits on how long it can thaw before the warnings and errors appear.

There is nothing worse than a compressor not starting on the jobsite – well, except when it won’t start in an arctic blast. By not winterizing your portable air compressors, users are at risk of unscheduled downtime by machines not starting, or even suffering structural failures if the weather is too extreme.

If using portable compressors in cold climates, be sure to take these steps to help ensure frustration-free operation. Don’t be left out in the cold.

Oil & Gas Applications, Did You Know?

Sullair and Caterpillar: Putting Collaboration at the Center