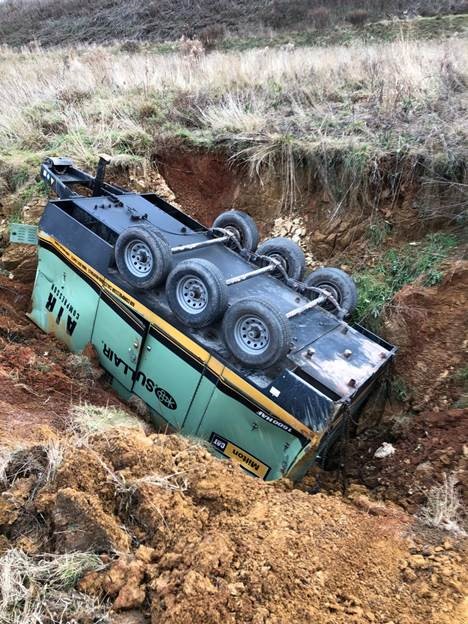 The Sullair Certified REMAN program has taken back many portable compressors as trade-ins which would have otherwise been destined for the scrapyard—or worse yet, ended up in the hands of parts pirates who sell the components online. Sullair Certified REMAN is a factory-authorized remanufacturing program for Sullair portable air compressors, featuring genuine OEM parts and product testing that meets the same high standards as brand new units.

One recent compressor taken back by the Sullair Certified REMAN program was a Sullair 1600 cfm air compressor that was swallowed up by a sinkhole and deemed unrepairable. Other examples of trade-ins include machines that were submerged underwater, a compressor that rolled down a 250 foot hill, and many other rollovers and thermal events. The Sullair Certified REMAN program began in 2013 and throughout the last six years, the group has saved more than 800 large portable compressors from graveyards.

We pride our remanufacturing process as better than new, which means the compressor will come out with all of the latest revisions and upgrades. Sullair Certified REMAN machines are completely remanufactured with genuine OEM parts and product testing that meets the same high standards as brand-new units. This process refurbishes valuable components and minimizes landfill waste. Plus, the remanufactured units are back on the jobsite fast, almost like they never left.

What began out of necessity to keep a diversified compressor offering for Sullair has materialized into so much more. The Sullair Certified REMAN program now offers our distributors another avenue to sell their used equipment without the fear of selling it to the public and have their former equipment compete against them in the rental market. An additional point which has materialized over recent years is if a company has a the wrong size compressors in their fleet as time and rental markets change, they can turn in their old compressor and buy the model they need now.