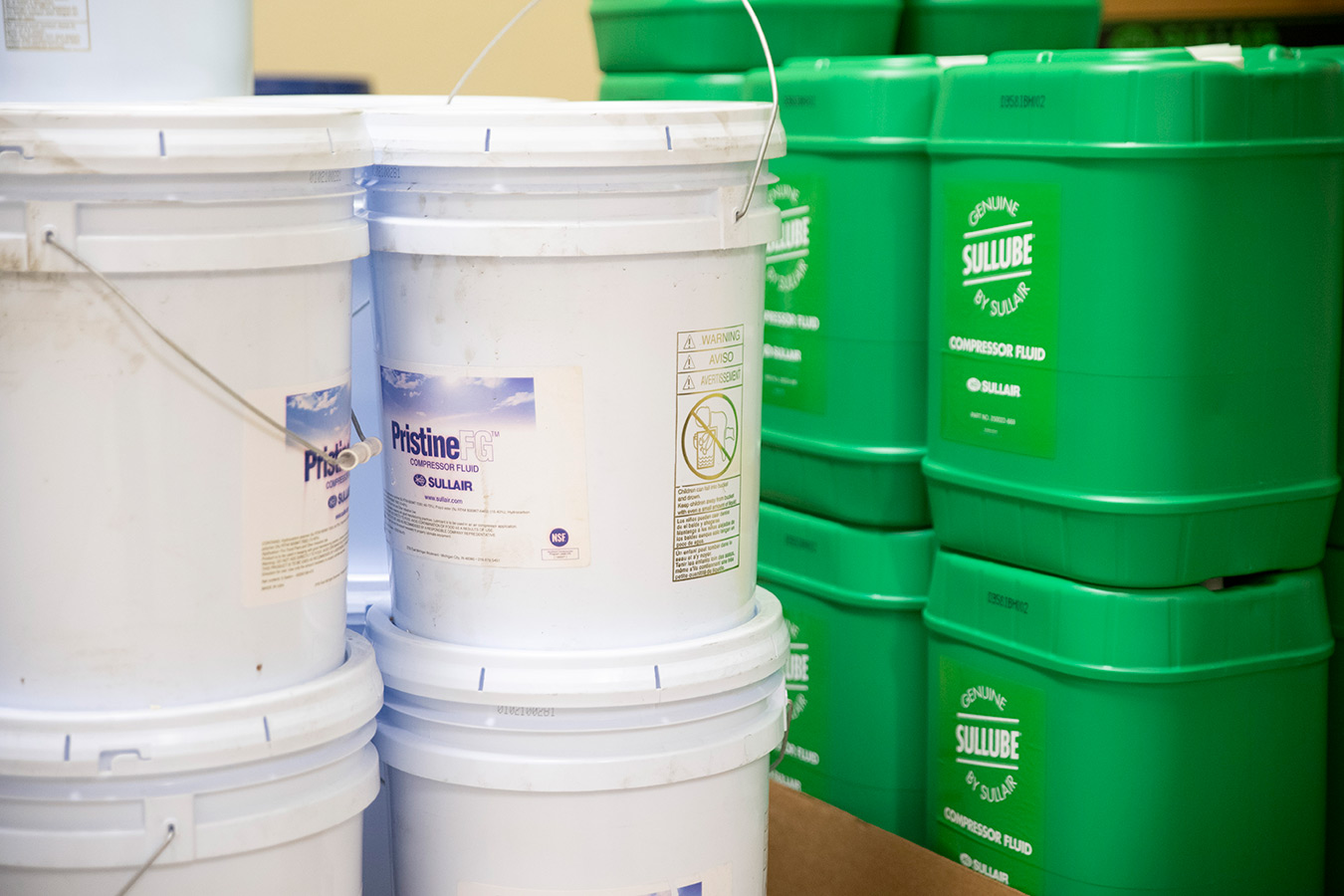 Picking out a compressor lubricant can feel a bit like venturing down the cereal aisle. There are so many options, how do you even begin to choose? You know your air compressor needs a lubricant to ensure maximum uptime and performance; but with so many lubricant options on the market today, it can be difficult to know which one is best for your specific compressor, application and business environment. Many questions may come to mind: why do compressors need lubricants? Which one do I choose? What are the different base stocks? Does the base stock even matter? And what about that pesky varnish?

Before deciding on a new compressor lubricant, we’ll answer all these questions and more to ensure you are making the right decision and keeping your company’s and compressor’s best interests in mind.

The three primary functions of compressor lubricants are:

Other important functions of compressor lubricants include:

Heat and varnish are the two primary enemies of rotary screw air compressors, and the two are directly related. High temperatures create more varnish, and more varnish creates more heat. When the two combine, it becomes a dangerous, vicious circle.

Understanding the Base Stocks

When seeking out a compressor lubricant, you’ll be faced with many choices. There are hundreds of compressor lubricants, dozens of lubricant manufacturers and even more resellers. To begin, start by considering the components of which the lubricant is made. Each lubricant has a primary ingredient, commonly referred to as a base stock. Each of these base stocks has different properties and pros and cons.

We will focus on the most common base stocks:

In the past, nearly all rotary screw compressors used hydrocarbon-based lubricants, but technology has greatly improved, leaving hydrocarbons in the dust. Most hydrocarbons lubricate well, seal the rotors and have anti-corrosive additives. These products offer a lower upfront cost but do not transfer as much heat as synthetics.

Takeaway:Hydrocarbons were popular in the past but technology has now evolved. Most rotary screw air compressor customers are now opting for other lubricants to better protect against varnish.

Hydrotreated Hydrocarbons offer good lubrication and a longer life than hydrocarbons alone. In addition, they offer a lower cost per gallon (than synthetics) but, like hydrocarbons, additional costs will be realized later.

In the Sullair lubricant lineup, SRF 1/4000® and SRF 2/8000® are examples of hydrotreated hydrocarbons.

Takeaway: Hydrotreated hydrocarbons slightly differ from synthetic hydrocarbons because some of the basic hydrocarbon components causing varnish are removed from the lubricant through a hydrotreating distillation process; but, ultimately, it still has moderate oil carryover, poor heat transfer and will varnish.

PAOs are the best lubricants the petroleum companies have to offer. They are the top-of-the-line hydrocarbon-based products and are good lubricants if changed properly at the correct change intervals. PAOs come with a longer life than hydrocarbons and good compatibility with air systems. They also offer a moderate flash point (450°F / 232°C). While they offer a higher purity level than the basic hydrocarbons, they still suffer from many of the drawbacks that basic hydrocarbons do.

They are limited in heat transfer, like the rest of the hydrocarbon-based oils, and will varnish if run at high operating temperatures. The compressor condensate produced while using these products is also not biodegradable and will require costs to remove.

Takeaway: PAOs do offer significantly better performance than hydrocarbons but have the potential to cause varnish and lead your compressor down a path of inefficiencies. Lastly, the compressor condensate must also be disposed of, directly affecting a company’s bottom line.

Diesters were initially developed for use in reciprocating air compressors to help with carbon build up on the valves and high operating temperatures. Diesters can handle those two issues. However, in rotary screw compressors, they are incompatible with many elastomers and have the potential to form sludge. Sludge is primarily the same chemical reaction process as varnish, but with a different outcome.

Diesters are often used as the primary ingredient in compressor lubricant blends. Beware, as many Polyglycol/Ester blends turn out to be a Diester base with a minimum amount of Polyglycol.

Polyglycol lubricants are the crème-de-la-crème of compressor lubricants. While they have a higher upfront cost, they are the premier lubricants and come with virtually zero downside.

Genuine Sullube™ by Sullair is a polyglycol lubricant. These lubricants will not varnish in the machine and will remove existing varnish when performing a flush conversion. These lubricants have a higher thermal conductivity, which helps the equipment run cooler, making it easier to stabilize operating temperatures. To put it in perspective, Sullube cools 10% faster than a PAO lubricant.

These lubricants also offer the safety of the highest flash point (505°F), very low carryover and biodegradable condensate. Most polyglycol lubricants are also recyclable due to a high BTU value per pound low ash content. This means there are no additional disposal costs, like with some other lubricants.

Polyglycol lubricants are also compatible with the components in all air compressors so you can successfully convert compressors to run on these lubricants without any issues.

Takeaway: Polyglycol lubricants, like Sullube, offer a company many benefits. Compressors using these lubricants produce biodegradable condensate, reducing a company’s environmental footprint and costs for condensate disposal. Polyglycol lubricants also do not varnish and, in fact, remove existing varnish that may have been built up in the compressor. This helps create a more energy-efficient machine and prolong your compressor’s life.

Why Do Some Lubricants Like Hydrocarbons Create Varnish and Other Lubricants Don’t?

It depends on what they use to make the lubricant. What is its base stock? Some base stocks create more varnish as they get hot. For instance, hydrocarbons are low in price but the poor heat transfer can lead to higher temperatures, which leads to machine shutdowns and breakdowns.

All hydrocarbon components are liquid at ambient temperature. Some become solid at higher temperatures. They then plate out the metal parts, like the rotors, because there is so little clearance between the two rotors. This then causes temperatures to rise and creates more solid components.

The two primary enemies of rotary screw air compressors are heat and varnish. Both are directly related because high temperatures tend to create more varnish. More varnish then creates more heat. When combined, the two create a vicious circle. Varnish can cause:

"Flushing" it All Out

In a day and age where compressor lubricant options can be overwhelming, it helps to understand the pros and cons and compositions of each. While some lubricant options appear to offer cost savings upfront, most equipment owners do not realize the effects of lower cost alternatives on the interior compressor components until it’s too late. The hidden costs will be realized, and your air compressor will feel the pain.