From Bellows to Beyond – A Brief History of the Air Compressor 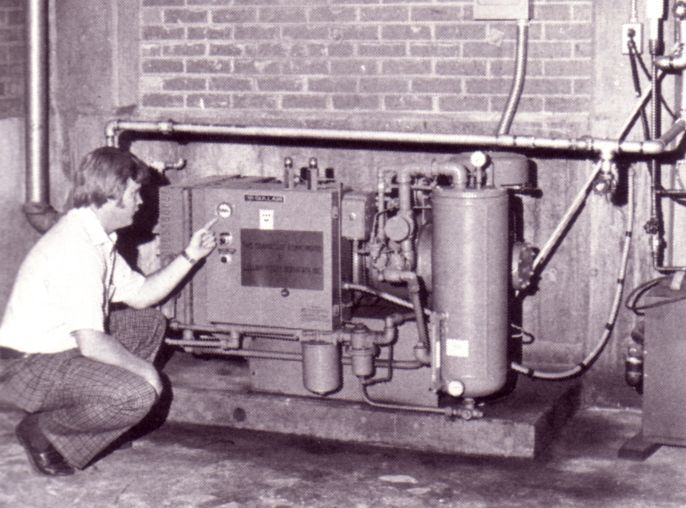 Often referred to as the fourth utility, compressed air is one of the driving forces of modern-day life. Air compressors are a core component in a range of industries and services including construction, manufacturing, industrial, automotive, pharmaceuticals, food and beverage, agriculture, and more. People around the globe rely on compressed air for the success of their business operation and to help complete tasks in many unexpected ways. But do you ever wonder how such a pivotal machine got to where it is today?

Dating back to the origin of mankind is the first air compressor: the human lung. Since the human body can exhale air, primitive people used their own breath to blow on cinders and create fire. But healthy lungs can only produce .02 to .08 bar of air pressure. As people began melting metals such as gold, copper and tin, higher temperatures and a more powerful source of air was needed. Here began the evolution of the air compressor, starting with the use of wind and blowpipes by Egyptian and Sumerian metallurgists. This was followed by the invention of the first mechanical compressor – the hand-operated bellows – and then the more efficient foot bellows in 1500 B.C. This device, a flexible bag whose volume could be changed by compression or expansion, produced a concentrated blast of air ideal for achieving higher temperature fires.

Fast forward to 1762 when John Smeaton, the first professional engineer, designed a water wheel-driven blowing cylinder that slowly replaced the bellows. Later, in 1776, an English inventor by the name of John Wilkinson introduced a more efficient blasting machine that could produce high amounts of air pressure – which became an early prototype for all mechanical compressors.

Over the years these prototypes improved and evolved, and in 1829 the first compound air compressor, a device that compressed air in successive cylinders, was patented.

An early application of compressed air was the digging of the Mount Cenis Tunnel in the Swiss Alps. The tunnel began with workers drilling by hand, clearing 9 inches a day. But in 1862, four years after the project began, compressed air was introduced to the compressed-air drills, and the project was then completed in just 14 years – twice as fast as expected.

Meanwhile, the Second Industrial Revolution was taking place and the United States was under a transformation. Fueled by advancements in the creation of steel, chemicals and electricity, factories began to take over and cities began to grow with the assistance of compressed air. Consumer and industrial goods that once had to be completed by hand now utilized stationary machines in factories and could be produced in mass quantities.

During the turn of the century, portable compressors on wheels were introduced and by 1910 most commonly had one large, single-stage compression cylinder driven horizontally by a steam or oil engine. Portable compressor development was quickly stimulated by the invention of the lightweight air drill which would aid in the development of city skyscrapers and suburban communities. With the help of portable compressed air, the Industrial Revolution saw road construction, bridgework, and railroad development open new economic opportunities for farmers, factory owners and various businesses to expand market potential and profitability. This period of prosperity was also filled with inventors and manufacturers seeking ways to improve the daily lives of American families by quickly developing and distributing modern appliances and devices, mass producing and packaging processed foods, and much more – all thanks to the help of compressed air and pneumatic tools.

In 1933, the first two-stage air-cooled portable compressor was manufactured and soon after standard sizes and ratings on actual free air delivery were established.

Later, a Swedish professor named Alf Lysholm designed the first twin screw compressor while working on steam and gas turbines. The screw compressor was patented in Sweden in 1935, and then found its way around the world including the Americas.

And as global development continued, people began to conceptualize more ways to utilize this technology such as the mining industry, especially in the US, where compressed air not only powered drills, but other machines such as hauling, pumping and stamping machines.

Although arguably inefficient and unreliable until the 20th century, air compressors have withstood the test of time and are vital to the productivity of almost every industry and the overall global economy. Today, air compressors continue to advance in technology and diversify offerings to keep up with the ever-changing needs and demands of business.

So next time you power up your air compressor, this piece of sophisticated equipment that is a necessity in daily operations, think about the power of a need and an idea, and the trail of human creativity and determination it took to get here.